Establishment of the Community

The first attempt to establish a Greek Orthodox Community in Marlboro was in the year 1912 in the hall of the building on Liberty and Main Streets. The then parishioners built a small chapel. Due though to economic reasons, they were unsuccessful. In the year 1916, a second attempt was embarked upon. All the Greek Orthodox communicants in the city were summoned to a General Assembly. It was enthusiastically agreed to establish a Community with the title THE GREEK ORTHODOX COMMUNITY OF STS. ANARGYROI. At this historic meeting a Constitution was adopted. A hall on Main Street was rented to celebrate the Divine Liturgy and other religious services of the new Community.

Click on either the original Greek or the translated English booklet below to view the entire 1923 By-laws. The .pdf file can be printed. 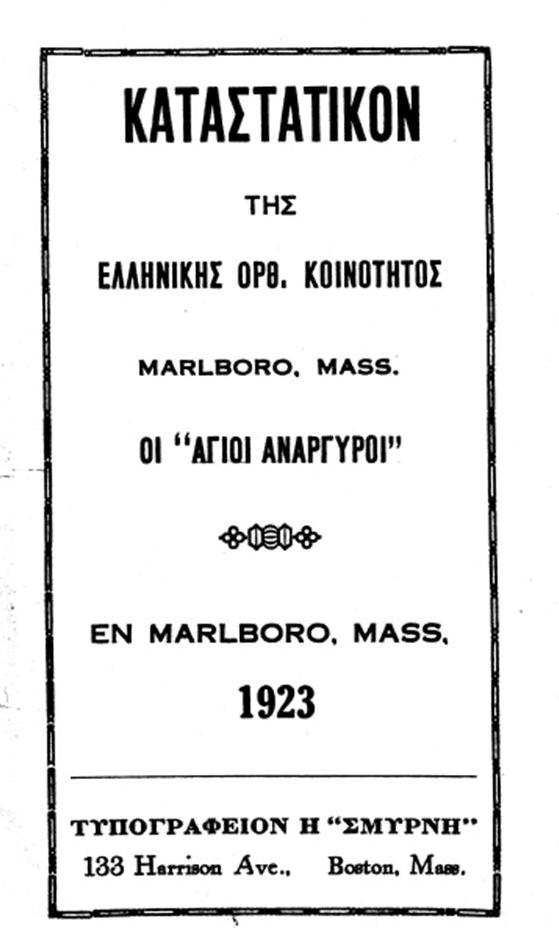 In 1924, a zestful drive was put forward, whereupon members and parishioners traveled from near and afar for the required financial resources for the construction of the new Church edifice.

Erection of the Church Building

On March 9th, 1924, the Community of Sts. Anargyroi met and decided to purchase their own Church building. A committee was formed to exhaust all energies towards this end. The committee finally fulfilled the wishes of the Community. They presented their thoughts to the Board of Directors who made the final arrangements for the purchase of the property upon which our beautiful Church now stands. The property was purchased on May 1st, 1924, for the financial amount of $2,500. The Community of Sts. Anargyroi was officially recognized as a Corporation and received its Charter from the State of Massachusetts on August 14th, 1924. The purpose of the Community as it attests on the Charter is “THE CORPORATION IS CONSTITUTED FOR THE PURPOSE OF ESTABLISHING A RELIGIOUS SOCIETY FOR THE BENEFIT OF THE GREEK ORTHODOX RESIDENTS OF MARLBORO, MASSACHUSETTS.

The official opening and placing of the cornerstone of our Church was on June 14th, 1925. The cost of the initial building was $14,692, excluding the hall floor. To meet the expenses of the building of the Church, the General Assembly met and decided that each family donates $25 to the Building Fund and the Community secure a bank loan of $10,000. Two hundred shares of $50 each were purchased by members and non-members. All these shares were later bought back or donated to the Community by the holders.

The construction of the Church was completed in December, 1925 and the first Divine Liturgy was celebrated in our Church on Christmas Day of that same year. 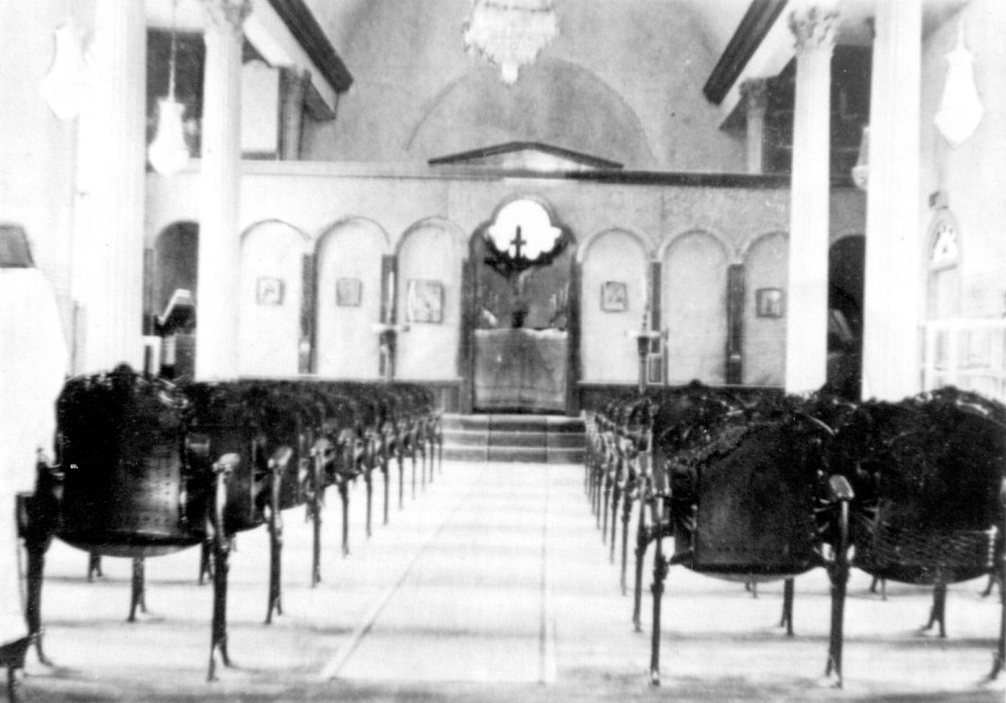 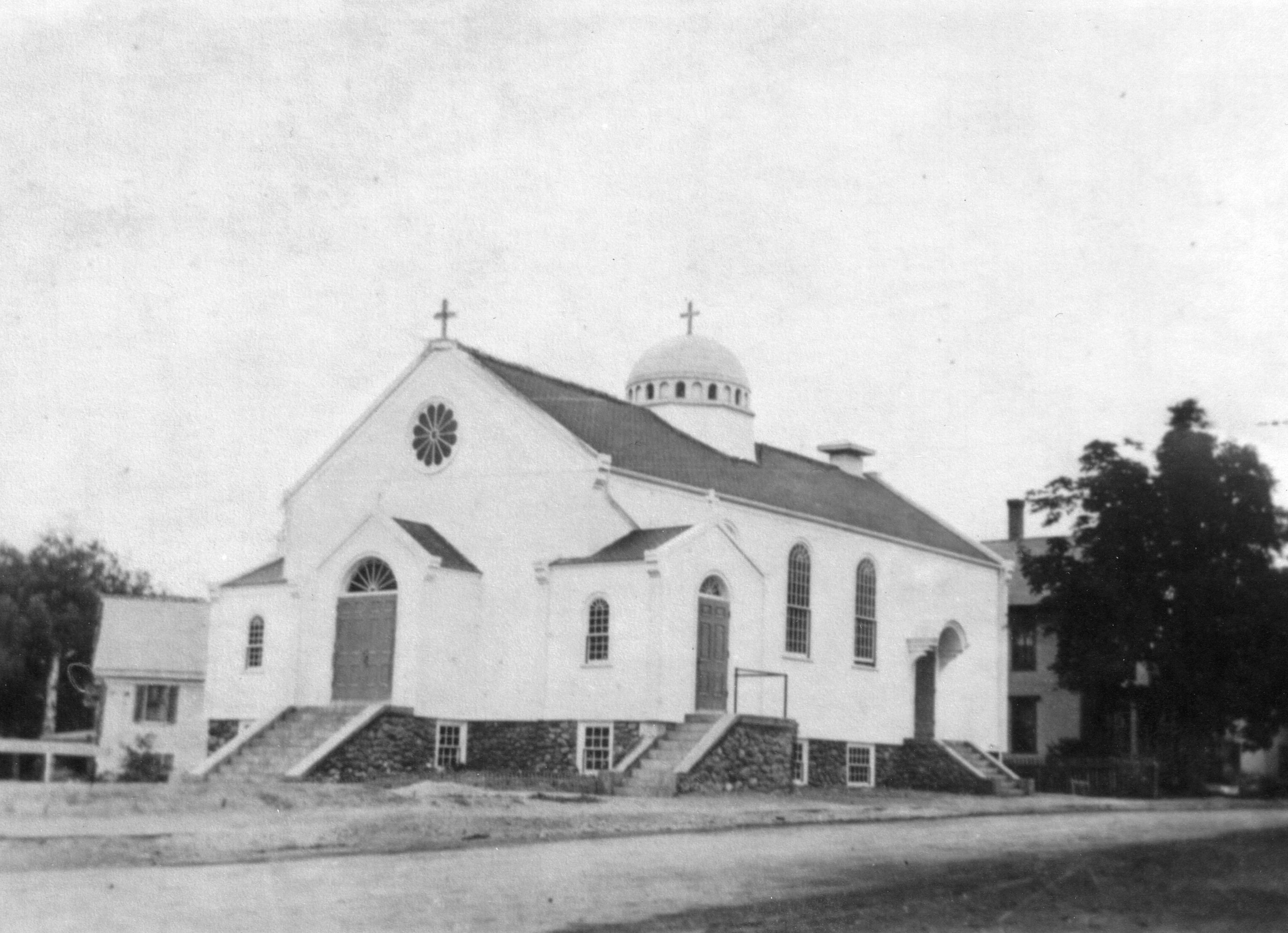 In the year 1926, the first Sunday School was established and the first Choir was formed.

In 1941, the mortgage of the Church building was paid in full and for the first time, the Community found itself completely out of debt.

The Community in 1954 purchased a Parish Home on Main Street.

In 1954 another momentous decision was made for the purchase of the large acreage for the picnic grounds on Milham Road for the amount of $1,500.

A new Altar and other ecclesiastical articles were installed in our Church in 1956 through the efforts of the Ladies Society “Enosis.”

During this era the Sts. Anargyroi purchased a new parish home on Prospect Street.

In 1972, the Greek community of Marlborough took yet another giant step to present to its membership better facilities. It decided to erect a spacious school and educational center adjacent to the Church.

In 1974 we beautified the newly renovated Narthex with a new Pangari and Icon Stand and a striking new mosaic icon of Sts. Anargyroi which was donated by the GOYA. 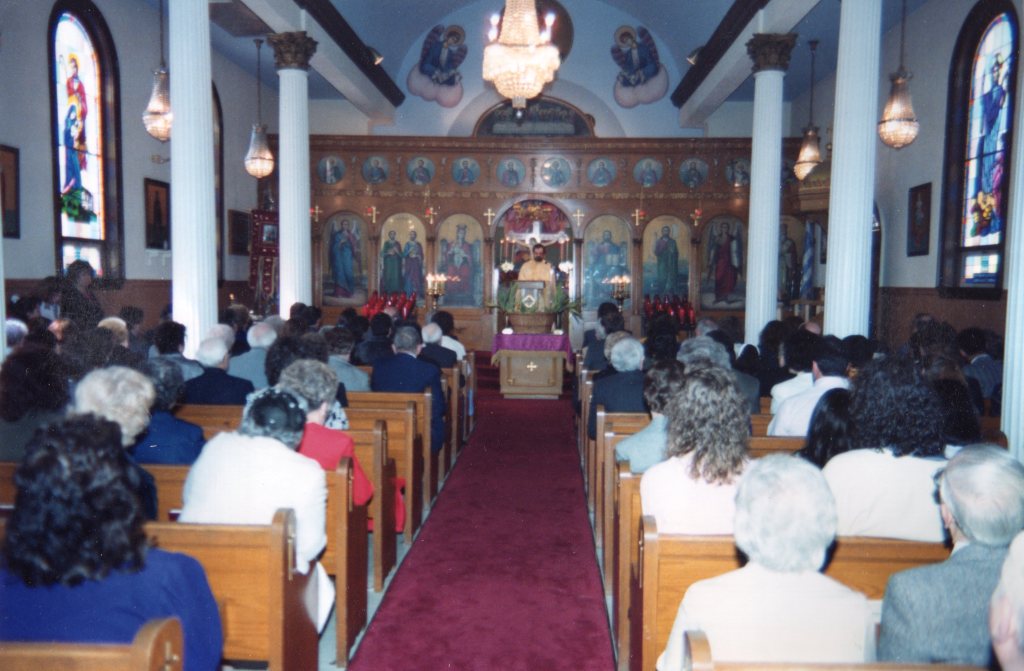 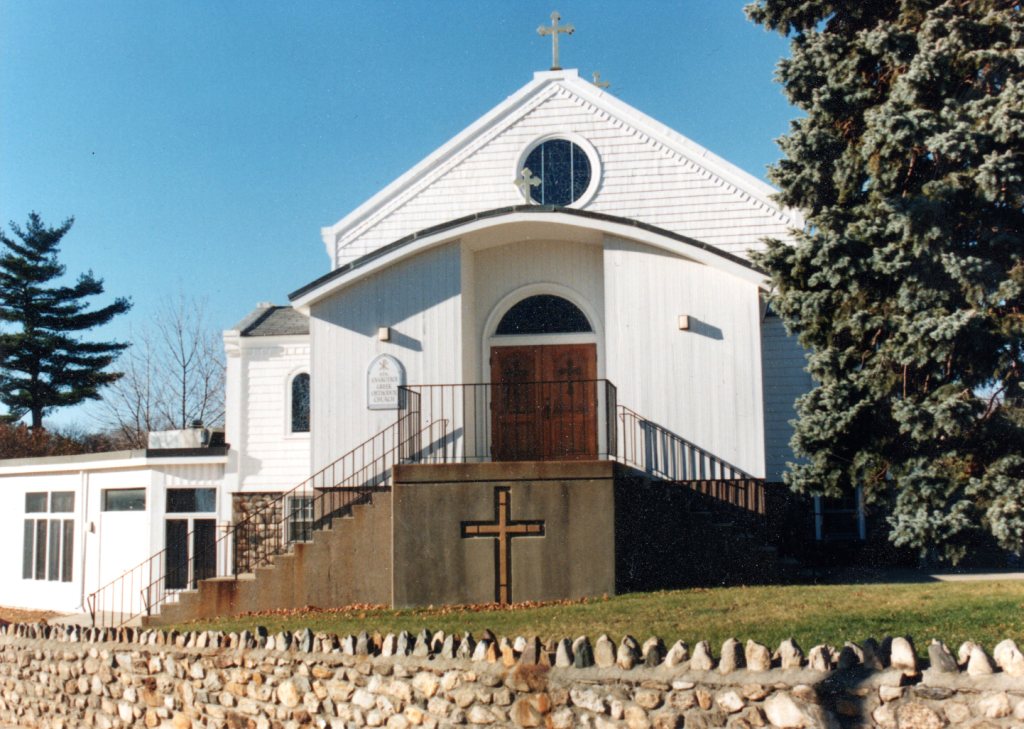 By the 1980s Grecian Festivals had become popular and were typically held around the church grounds. Also, it was becoming increasingly difficult for the community to maintain the picnic grounds as they were located in a remote part of Marlborough. In 1986, the membership decided to sell the picnic grounds. In 1987, the picnic grounds were sold and the proceeds were invested.

By 1997 it had become more common that priests and their families preferred to buy their own homes. In accordance with this trend, Sts. Anargyroi sold the Prospect Street parish home to a parishioner.

Sts. Anarygroi took a bold step in 1998 by purchasing 28 Cashman Street (two doors down from the church). At this time, the community started to think about the possibility of building a new fellowship hall.

One year later in 1999 we had the opportunity to purchase the house adjacent to the church at 22 Cashman Street. The two houses that were purchased were razed and plans were begun to erect a fellowship hall on that location.

But tragedy struck in February 2001. A fire devastated our church. The addition that housed our classrooms and offices was completely destroyed and the original edifice was ravaged. All that remained were the exterior of the church and importantly, the spirit of the parishioners of Sts. Anargyroi to rebuild.

During this time St. Mary’s Roman Catholic Church of Marlborough graciously offered space to Sts. Anargyroi. We could share a classroom as an office and use the basement of their classroom building to hold services. Once again, after more than 75 years, Sts. Anargyroi found itself in a temporary hall. This continued for two years while we struggled to rebuild our beloved church.

Six months after the fire, the community of Marlborough rallied around Sts. Anargyroi in an extraordinary gesture of goodwill and friendship. In August of 2001, a fundraiser spearheaded by Marlborough Community Services and the Marlborough/Hudson Clergy Association was held at the Holiday Inn. The hotel provided all the food free of charge. This event titled” Together We Can Rebuild” drew over 750 people for an evening of dinner and dancing. More than $30,000 was raised on that warm and memorable summer evening. Beyond the financial success the event fortified our spirit to rebuild.

On November 1, 2003, on the Nameday of our Patron Saints Cosmas and Damian, we found ourselves home again, in a totally restored, now slightly larger church. If it were possible, the restored church looked even better than it had prior to the fire.

The Memorial Plaza was completed in 2005. This allowed handicap access to the front of the church for the first time. It was adorned with flowers, trees, grass, and granite benches on which parishioners can rest and reflect peacefully upon their lives in the presence of the House of God.

The next few years would be a struggle. Although the church had been restored, we did not have the funds necessary to rebuild our classroom and office building. We did, however, still have the two pieces of land adjacent to the church. Slowly we began fundraising with the hopes of building that fellowship hall.

On Labor Day weekend of 2006, for the first time since 1990, Sts. Anargyroi held a Grecian Festival. Because we had the land next to the church, we could have the entire festival within our property. There were delicious Greek foods and pastries, music and dancing. Parishioners of all ages participated. That sense of unity and purpose had returned to Sts. Anargyroi. The residents of Marlborough and surrounding communities join us in the celebration of our culture and heritage and have supported our efforts. We continued to hold this event annually with the hopes that we would soon complete our goal to build the fellowship hall.

In September 2008, the community passed a resolution to spend $1,000,000 towards the building of a fellowship hall, and to retain Peter Bemis of Engineer Design Consultants of Southboro to be our site engineer. While he continued to work with us in the concept stage, the price of materials skyrocketed, and our investment dropped substantially. As such, the project became stagnant for a time. With Mr. Bemis' advice and council, we were introduced to John Younnis of Priggen Steel Construction Company.

As 2009 came to a close, the Parish Council decided that our investment had sufficiently recovered, construction costs had dropped due to the poor economy, and bank interest rates were at historic lows. The Council moved accordingly to lay the groundwork for a move to build the Hellenic Hall. A loan was secured with Marlboro Savings Bank as those terms were most favorable to the church.

Because so much time elapsed from the Sept. 2008 authorization, in March 2010 we went back to the General Assembly for another vote. The vote to appropriate 1.2 million dollars with a cost overrun provision was passed unanimously!

Groundbreaking for our new Hellenic Hall was in April 2010. 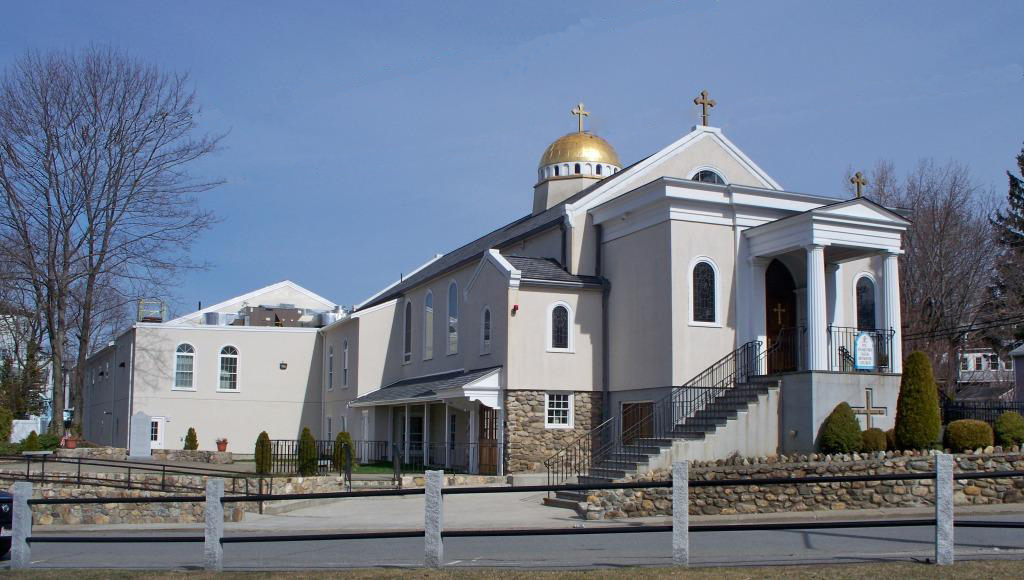 Now 10 years after the fire, Sts. Anargyroi once again had space for education, meetings, dinners, functions, and fellowship.

His Eminence Metropolitan Methodios joined us on February 6, 2011 to bless our new Hellenic Hall and to celebrate with the parishioners of Sts. Anargyroi on this long awaited and joyous accomplishment.

His Eminence again came and installed Fr. Gregory Christakos, our current pastor, as proistamenos at the vespers for our feast day on October 31, 2011.

Over the next several years our church saw the advent of new ministries including the Community Hike and the outdoor blessing of the waters every January.  We revived our participation in the Our Father's Table feeding ministry and in 2019 our church hosted the ordination to the priesthood of Fr. Andrew Giourelis by the hands of His Eminence Metropolitan Methodios.

In 2020, in the midst of the Covid-19 crisis we introduced a live stream system for church services as well as online giving.