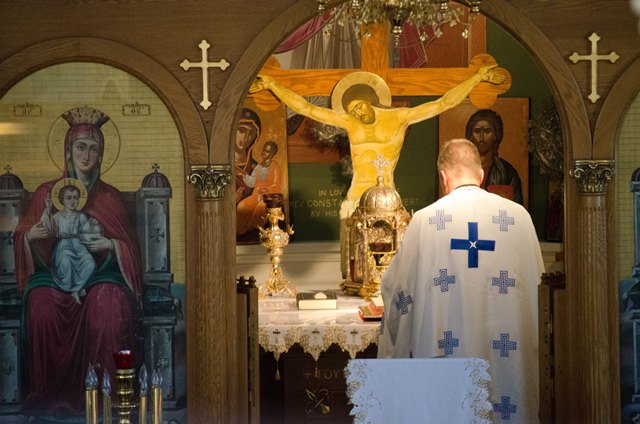 We are going to hear the name Barabbas a bit during Holy Week this coming week, especially on Thursday and Friday during the Gospel readings. He is the character whom the crowd wants released by Pilate during the “passover pardon” instead of Jesus, whom Pilate sees as innocent. The usual English or at least American English pronunciation of Barabbas is something like berABis, with the stress on the second a. When I read these passages, I make a point to pronounce it Bar Abbas, breaking it into three equally-emphasized syllables. This is to accentuate the fact that it is not just an Assyrian (or Aramaic, or Syriac – take your term of choice for what is the same language) word but one that clearly means son (bar) of the father (abbas – there is no definite article in Assyrian). The word play is obvious – Barabbas is a false messiah and Christ of course is the real thing. The crowd doesn’t get it and wants the false messiah released to them. This is pretty straightforward, but there are other possibilities of translations that stem from the imperfections of transliterating from Semitic languages to Greek (and English) that help us color out the meaning of Barabbas’s name in a way that can help us understand the story better, not unlike the way the Rabbinical writings expand scriptural stories for the same purpose. Let’s keep the “bar” for what it is – son of, in this construct – and look at “abbas”. We are told directly in the New Testament that Abba – a term Jesus uses to address his father – means father, and this is indeed true – the root is the same in all Semitic languages, with an alef – actually a glottal stop that becomes an alef – a- when elided with a previous consonant – and a b sound. The s is the masculine ending for a male name in Greek (Barabbas in scripture is most always in accusative case (perhaps in dative – my Greek grammar is a bit rusty due to my interest in Semitic languages). But what if the a is actually an ‘ayin – the voiced pharyngeal fricative characteristic of Semitic languages – rather than a glottal stop? This changes the meaning in a way that still fits with the story of Barabbas and Jesus. There is nothing new here. Fr. Tarazi, in his first New Testament introduction, offers one alternative translation. He introduces the idea of metathesis – switching around the consonants of a Semitic word – a not uncommon development in these languages. Fr. Paul keeps the two alefs and reads the s as a velarized s rather than the fricative sigma in Greek and makes the name bar saba – son of the army. The implication is that Barabbas is the hoped-for military insurrectionist messiah. But what if the alef were an ‘ayin? Greek would represent this as an a, although in the Septuagint the rough breathing mark would be added to an alpha to represent the ‘ayin. Without metathesis and subbing the ‘ayin for the alef or alpha, we get bar ‘abbAs (with the capital a representing a long vowel). This is one of the words for lion in Arabic, so son of the lion. If we metathesize the consonants and get sab’a, with that last a actually an ‘ayin, we have an Assyrian (Syriac, Aramaic, etc.) word meaning “to be satiated”. These last two understandings of Barabbas highlight the character’s role. The reference to a lion brings to mind the Roman gladiator fights and the idea of sacrifice, while the Syriac “to be satiated” take clearly fits the idea of satisfying the crowd. The meaning of Barabbas is obvious; these parallax Semitic views help flesh out the meaning.

The Witness of the Women

Look Up to See the Lion

A Tale of Two Lents

The Depths of Noah

The Redemption of the Serpent

The Triumph Of The Icons